I always seem to gravitate back to LJ when I feel like i'm falling apart, when i'm drowing and cannot see a way up.
Another year, more stress, same stress.
When the hell am I gonna get a break!

Oh Hai There!!
Was taking a trip down memory lane, and LJ reminded me that it has been 3 years since my last post.
I need to start writing again, something needs to be an outlet, and I suppose this is as good a place as any.

*Wave*
Busy busy, got a full time job, moved house.
Dont have much time to do much of anything for myself anymore :(
Miss all my LJ friends though

Yay! There are still friends out there *wave*

I am still here and reading, the last year has been awful. Pierre finally admitted he was suffering from depression and started taking meds to remedy that, he quit his job as that was a huge contributor to his mental health going down hill so badly, so things have been very tense, and very tight money wise.

My anxiety is at nasty levels, has been since I was pregnant with Kalina, but hasnt gotten better this time. Not sure what I am going to do, I feel like this switch has been switched and its now stuck on and broken. I am taking meds, but they arent helping that much and I feel like a zombie, poor Pierre is having to carry us both at the moment which cant be helping his state of mind either. Its like bad mojo feeding off each other and its so not healthy for either of us.

On the plus side, he now has a job, that is actually making him happy. Its badly paid and the hours are crap, but he is happy, and actually wants to go and do it, so I really dont have much to complain about. Its nice having a break from each other, we have been living in each others pockets for the last 8 months and its not done pleasant things to our relationship with each other or with the kids. Baby steps getting things back on track though, hopefully we can work on it and start repairing things, I am hoping its not too late.

The kids are just awesome, very trying, and its a huge adjustment being a sahm mama to 4, I only had to do it for 3 weeks after Kalina was born because Pierres resignation date was the 4th June, so its an huge difference. I dont regret that he has been home that long, it has made such a massive difference to my relationship with Kalina, and has helped the other kids in the transition to another sibling cos they were still getting decent amount of attention from us because we could share it.

They are growing far too fast though, Aston turns 4 in March and he is so very excited. I think this is the first time he has had so much excitement about his birthday. He has asked for a Thomas cake and I think we are going to take him out to the old railway in Glenbrook for his birthday as they will have a Thomas display his birthday weekend, and he is still free to get in on the day we are planning to go (charges are for 4+ he turns 4 on the sunday lol) He is a very sensitive little dude, with an awesome imagination, he is really into telling stories of things he does (and sometimes I swear he is telling us of previous lives or something) and seems to channel the things that his dad does ie he catches buses to his work, and cooks pizza and fish and chips and has coke etc its so awesome to see the adoration he has for his dadda.

Amalia is turning 7 this year, I cant believe I have a 7 year old! She is growing up to be such a wonderful little woman. She is going to be a big sister again this year too, with her dad and her other mum due to have a bubba sometime in July/August :D
She is in year three at school this year, and will have her first male teacher which I am quite looking forward too for her, there arent enough male teachers anymore. She adores reading, and loves writing which is so wonderful to see, she is forever writing stories, and has an awesome imagination.

Davien is 3 this year, that seems to have gone by so quickly, yet it feels like he has been here forever. He is a pretty smart cookie, and his language has just taken off alot over the last year. Hes pretty happy go lucky, though we are going through the 2 year old boy stage at the moment which is a bit hard to handle at times. He isnt a big people person which makes taking him out anywhere a bit difficult but we are working on it. He is just about totally weaned, which makes me a bit sad, I am so happy that we made it this long though, and tandem feeding, its not been easy and I am not sure I would do it again, but I am so glad that I did. He is such a lovely little boy.

Kalina is just awesome, 8 months old, furniture surfing, has the cutest little crawl, she sometimes does hands and knees crawling but does a sort of up on hands hop forward, launch self forward kind of thing, very cute too watch and she moves pretty quickly too lol I am so not ready for her to be walking yet, she is still very much my baby. She has been my rock over the last 8 months, and I am so greatful that I have been able to have the time with her that I have. The big kids totally adore her, they dont seem to show a huge amount of jealousy, even Davien which was suprising, but it is great either way.
Its hard to imagine she is my last baby, though she would be the perfecting ending to my child bearing experience.
I cant see myself never being pregnant or birthing again, but not sure about adding another to the family, definitely not for the next 4-5 years. I need at least a year to myself, I would have spent nearly all of my 20's pregnant, or breastfeeding. Over 7 years ive shared my body with someone else and it will be nice when I dont have too anymore, even if its just for a short while :D :D

Is there anyone still out there?

I had my baby on the 7th of May 2010 :)
I have finally written my birth story and have posted it on my never before used blog lol
http://neivad.blogspot.com/2010/06/kalinas-birth-story-7-years-of-planning.html

Another 4ish weeks to go. Nesting like crazy trying to get the chaos that is my house sorted out for babies arrival. Still have tons to go but getting there slowly. Pregnancy has been pretty exhausting this time, but other than that its been pretty uneventful. Still quite unsure how its all going to end but try not to think about it too much.

Aston turned 3 last month, it has gone so fast. We have just moved him into the same room as Amalia, I think I am more upset about it than him lol you would think after three years I would be ready to have him sleeping elsewhere but im not. Oh well, im sure I will live, I really need to have a house with a massive studio bedroom I think that would suit me best, its been nice having all three kids in our room for the past month (while I was rearranging the rest of the rooms) still having huge issues with him and his oversensitivity and rather enthusiastic tantrums, struggling to work out what works, but I am sure over time it will come right.
He is so very much looking forward to the baby coming, he calls it his baby, and is forever trying to feel the baby moving, and talking too it. Its very cute!!

Amalia turned 6 last weekend, she is growing up too fast :( She has lost 4 of her baby teeth and far too clever and mature for her own good. Its kind of scary, she is so very much like me when I was growing up. At least I know that if I nurture her then she will turn out ok :)

Davien is still a cheeky monkey, I cant believe he is 2 in a month and a half, he is still my baby. Thankfully he is still breastfeeding, its been great and im hoping he will continue when Thumper is born, will make my life a fair bit simpler. His language is taking off, its scary how much he understands and the things he says. I swear he is older than he is, even though he is the 'youngest' of them all.

Busy busy with three kids, was studying, Amalia is at school which is a PITA, kids growing too fast, driving me batty. Knitting, sewing, plodding along. Aston is totally toilet learned during the day, Davien is such a ham and such a sweetheart, and Amalia is still a teenager before her time.
Nearly half way through my pregnancy with baby #4, due in May. This pregnancy is very odd, and a huge test of trust, bit of a struggle at times but im getting there :) 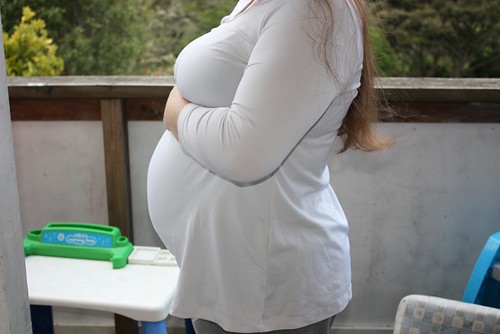 Aston was pulled into this world, in about an hour and some change.

Wondered why I was feeling so down and grumpy and sad and just blah.... Hopefully a good nights sleep will help, but im not feeling very well right now :(
Have two lectures to go to tmrw so need to get my head together.

Last year I was ok, this year not so much. Amalias first birthday was nasty, I was vomitting and had the runs the night leading up to her birthday and felt ick for the morning (though I didnt put two and two together till a few months later) so im thankful I am not experiencing such a nasty reaction this time...

But I am so disorganised and busy this week that I havent organised anything for his birthday, he got his present today already... hoping I can get myself together enough to do something next Sunday.

Feeling like an arse mum right now :? I am sure one day I will be healed enough to be happy about this date and the next 2 weeks following, but im not doing so well right now... Thought I was fine and ok but apparently not. Ive ruined such an amazing little person, and I so hate myself for it :? :(
Collapse