First day down and it went well. It was basically just orientation type stuff, first lecture is on Thursday or Friday I think. Missed my babies terribly but thankfully it was just for 2 hours and they coped ok.
Im only studying part time at the moment, doing a certificate in Health studies which is basically a health bridging course, for when I eventually study midwifery (when kids are older and we can afford for Pierre to only be part time) should be fun, and hopefully my work load isnt too full on, aprox 25 hours a week study and contact time.

In other news Aston turns 2 on Friday and Amalia is 5 next month. Have decided (much to her fathers disgust) that I am homeschooling her, at least for the first school year and then will re-evaluate when the time comes to legally enrol her or apply for her exemption.
Davien is great, though we are having issues with allergie with him too :(
My sisters baby is due the end of this month, its gone waaaay too fast....

I start uni today... only slightly freaking out :S

Amalia is 4.5 already, I am sure she was only a baby last month. We are in the teenage years already lol and this has been made worse by starting kindy (much to my objection) her number skills are wicked and her language and comprehension are awesome. She adores Davien, not so keen on Aston anymore but he picks on her so its understandable. She is really helpful around the house.

I am going back to uni next year to get my health studies certificate, which is a bridging course to midwifery which is what I eventually want to do. I am absolutely loving being a mum of three, my children are the greatest achievement as of yet, and I cant imagine being anywhere but here, they each bring so many different pluses to life.
Pierre and I are rocky at the moment, hoping we can work on it though... 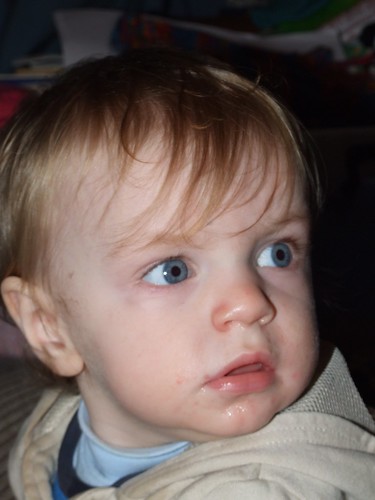 Aston is now 18 months, he has one heck of a temper on him but when he isnt headbutting you or ripping your hair out he is a real honey. He loves Davien to pieces, and is really gentle with him. We are having health issues with him, he has dairy/soy goats milk allergies, and has had a few febrile seizures which are a worry and scary as when they happen. I think he may have asthma but we need to wait and see I think. You know when you know something is just not right... I feel like that with Aston and I hate it!

Davien Michael Alexander is nearly 4 months, the time has flown by. He is the biggest sweetheart, so mellow and happy, he is a very chatty little man too :D
Things are so so different this time and it makes me sad and angry, it just shows how much I missed out on with the other two. I have to keep asking Pierre if Aston was chatty, or smiley etc cos I just cant remember :(

Yet to be named baby boy was born yesterday morning 4th of June at 5.28am after about 4-5 hours fast intense labour.

He would have been born at home unassisted, but one of my support people called an ambulance because the backup midwife told her too (she was on the phone, my midwife was off that night cos she was on a study day) and they took me to North Shore hospital (somewhere I never wanted to go again in my life)... only good thing about that is I got to use the gas lol
1 hour 15 minutes later I pushed my little man into the world doubting myself right until the moment I picked him up off the bed :D:D
I wasnt scared at all, except for a small patch where I discovered blood on my hand and stressed briefly over it but in hindsight it was just normal stuff :D
Only a couple of grazes, and a tiny tear (that they said needed 1-2 stitches but I refused)
I ate a piece of placenta, and it seems to have helped my bleeding is not that heavy at all, and is turning more mucousy, my periods are heavier.

I stayed at the hospital for yesterday and last night so I could get some sleep and am now home!

He weighs 4.190kg, 52cm long, 34cm head and looks like a smaller rounder faced version of Aston :)
He was born 2 days after his due date!

Everyone at the hospital was facinated by our lotus birth, and asked tons of questions, I also felt awesome speaking with a student midwife about my VBA2C, lotus birth, eating placenta and all the weird ass hippy stuff that I did lol

The biggest thanks to Pierre for standing up for me to the ambulance driver, for being there for me nearly the whole time, kissing me, hugging me and telling me that I could do it even when I said I didnt think I could.
Sadly he missed seeing his son being born as he went downstairs to change Astons bum :(

Thank you to my two other wonderful children who behaved so well in the delivery room and were a big part of there baby brothers arrival.

Thank you so so much to Lou and Jax for rubbing my back and telling me how wonderful and amazing I was and that I could do it.

~ Spinal Anaesthesia (mainly because for me an epi is too patchy)

~ I want to talk to my baby as you are removing him/her, the first voices I want my baby to hear is mine.

~ Sex not to be announced, the screen to be lowered and baby shown to me so I can see for myself.

~ No morphine - Morphine made me drowsy and I want to remember, first seeing my baby, and first breastfeed. If possible I would like something for nausea before I get it.

~ I want to wear my own clothes (I wore my own tshirt into surgery, it didnt matter too me if it got bloody, it made it less medical and didnt get dirty at all)

~ Lotus Birth, placenta to be left attached to the baby. This is a religious requirement. I can provide information about what this entails if necessary.

~ I DO NOT CONSENT to a hysterectomy!

~ Pethidine PCA, to be hooked up and explained to me, but will start to use once in my room, not while in recovery as the first couple of hours are important bonding time.

~ If baby and placenta need to be separated for medical reasons, umbilical cord to be left long so I may cut it myself in recovery/my room

~ Baby to be left covered in goop and not dressed. We can provide blankets, a hat etc to prevent baby getting cold. Prefer support person to have skin to skin with baby if I am unable too.

~ Baby to be given straight to my support person and no checks to be performed until breastfeeding is established and I am settled in my room. This includes weighing and measuring etc (apgars can/are performed visually as soon as baby is born)

~ Baby to be brought straight to me, and I want to breastfeed on the table, my support person will help me with this

~ No injections, blood sugar checks (if required) until after breastfeeding is established and I am comfortable in my room

~ Breast only, no formula, sugar water

~ I wish to continue breastfeeding/holding my baby while being taken from recovery to my room.

~ If I have a single room, I would like my support person to stay with me the first night.

~ Placenta to be kept and I would like to see it once in my room, and the different parts shown to me

Thankfully the pox are on there way out, no new ones in a few days and havent needed to give Pamol or Phenergan for 2 days as his temp has stayed down! He is nearly 100% back to his normal self, although he is now back to waking a few times at night, as he is thirsty :( We need to take him to our GP in about a week or so to get a repeat of his bloods done as one of his levels were elevated, but everything should be ok with that as all the other ones were all within normal ranges.
He is going to have a few scars but they are all looking way less Angry than they were before thank goodness!

Aston has the pox, his case is a lot worse than Amalias was, his face, head and nappy area are covered, and his temp has been consistantly high. Yesterday when I was at my grandmas, I felt his temp go up, so gave him some more pamol and headed home (less than 15 mins away) when we got home Aston had been sick in the car seat and was shivering (he was wearing an all in one and singlet) so I knew his temp was up. Got inside and started running the bath, stripped him off and checked his temp which was 39.1 under his arm. Put Aston in the bath, called P and told him he should come home cos his temp was so high and rang Lou to ask what a scary temp was cos I couldnt remember.
( Collapse )
Collapse